Global Destruction.org is one of the world’s largest non-profit organizations fighting worldwide to stop or slow man’s ever-increasing negative effect on our planet.

The pace of the destruction of our planet has accelerated tremendously over just the past 50 years. Time is running out. We want to slow it or stop it and we want you to help.

For example, nearly 20% of forest in the Amazon has been destroyed since 1970. If the rate of global forest loss continues in just that location on the Earth, scientists warn that that region will get pushed into a permanent state of savannah, releasing billions of tons of greenhouse gas emissions and leading to increased droughts and huge losses in agricultural production within our greatest point of irreplaceable rain forest.

Globally, the world’s natural diversity has been declining at rates never before seen in human history. Now it has been estimated, quite accurately, by several major organizations that more than 1 million species are at risk of extinction due to human activity. From 1970 to the present, there has been over a 55% decline of living organizations throughout the Earth and across all vertebrate and invertebrate species. More than half of the world’s coral reefs and over a third of all wetlands have been wiped out or critically damaged. 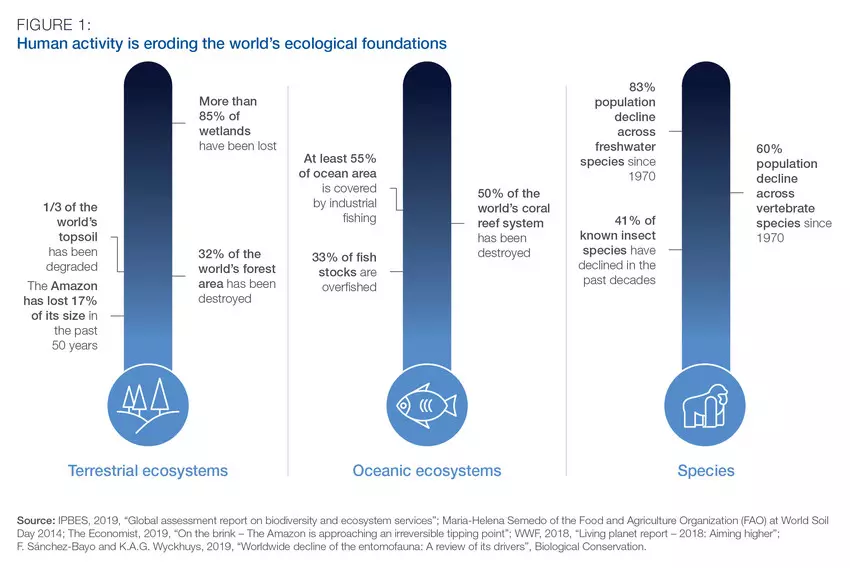 Forest fires, man-made and naturally produced are now due to hotter temperatures – in the U.S., the Amazon, Africa, Australia and Europe – have killed billions of animals and wiped out vast areas of forest land of all types.

The global economy has grown by four times four-fold, we live significantly longer and childbirth mortality had significantly dropped filling the planet with billions more humans, all needed resources of all kinds.

For the first time in history, humankind is the locus of climate and environmental change. Scientists and researchers predict that if current rates of nature destruction continue globally, sensitive areas such as tundra, grasslands, coral reefs, forests, deserts may intersect an irreversible tipping point.
This destruction not only applies to our planet from a natural resource basis, it is also economically disastrous. The report Nature Risk Rising: Why the Crisis Engulfing Nature Matters for Business and the Economy shows that $44

Trillion of economic value generation – over half the world’s total GDP – is moderately or highly dependent on nature and its services, and therefore exposed to risks from nature loss. Intensive monocropping, industrial-scale fisheries and unsustainable construction have further exposed economies and societal well-being to nature-related risk.

There is an urgent need to reset humanity’s relationship with nature. That is our mission. That is our passion. That is our goal. We are fighting to stop the destruction of our planet through education, through economic assistance, though sponsorship, through project assessment and corporate and individual funding. We are a non-profit organization approved by the IRS for tax-deductable donations. Please help us help the Earth.